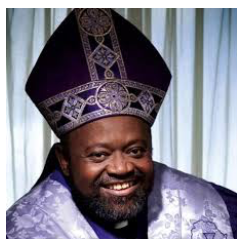 A Man and His Vision: The Life and Work of Carl Bean
By Frankie Lennon

“Wherever you identify yourself sexually along God’s rainbow of sexuality, know that you are not in error. Homosexual, Lesbian, Bisexual, Heterosexual, Transsexual…you are not a mistake. God made you the way you are and God loves you just the way you are. So love yourself and know that you are very special!” This affirmation is one of the cornerstones of Unity Fellowship of Christ Church, created by Unity’s founder, Archbishop Carl Bean. It is an affirmation that has healed, encouraged, and transformed many who have come through Unity’s doors, relaying one of the central messages that Archbishop Bean continues to teach in his inclusive and visionary ministry. Raised in Baltimore, Bean credits his spiritual development and love of Christ to early church activism. Sharing the gift of his voice to empower and comfort family, neighbors, and church members came naturally to him, as did being active in the church’s music ministry and its Baptist Training Union. But when he discovered as being same sex attracted, there was no one to tell him to honor and cherish his homosexuality, no one to affirm that he was not in error, that God’s love has no boundaries. There was no one to soothe the sting of rejection by family and church members. Thoroughly devastated, Bean attempted suicide when he was twelve. But God brought him through, preparing him to help others who are rejected and stigmatized, others who would suffer pain, loneliness, and confusion upon being told that there was no place in the church for them.

After a celebrated career on Broadway, touring with the Alex Bradford Singers, making Billboard charts with his recording “I Was Born This Way” which celebrates being born Gay, Bean answered God’s call twenty five years ago, in 1982, to serve others as an openly Gay, ordained minister. He then went on to become founder and pastor of Unity Fellowship of Christ Church, Los Angeles; the mother church has spawned a movement within the last twenty-five years that has witnessed the birth of churches all over the United States.

The Unity Fellowship Church Movement, a denomination of Progressive Christian Churches, embraces and is based upon Liberation Theology, which is not oppressive to women, is not based on a male-dominated hierarchy, is not oppressive to Lesbian, Gay, Transgender, Bisexual, Intersexual, or Heterosexual people; it is a theology which fights for social justice, teaches that all people have the right to question, to study, and interpret the Bible in a manner that frees from oppression, a theology which teaches that God is greater than any religion, denomination, or school of thought, and that God is Love and Love Is For Everyone. In 1992, Carl Bean was consecrated as the first Presiding Bishop of the Unity Fellowship Church Movement. In 1999, along with the witness of hundreds of people, a House of Bishops and Board of Elders, Carl Bean was consecrated as the first Archbishop of the Movement.