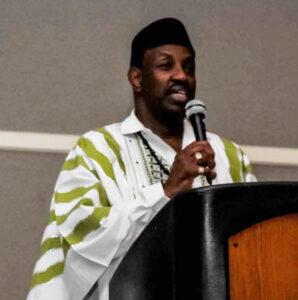 Rudolph “Rudy” H. Carn is the Founder and retired CEO of NAESM, Inc., a non-profit National Leadership, Advocacy and Service Organization in Atlanta, GA. Since starting

the organization in 1990 along with Mae Reed and Madam Edna Brown, Rudy has remained committed to providing HIV/AIDS prevention, education, services, leadership development, advocacy and technical assistance primarily to African American [men who have sex with men] both in Atlanta and nationally. Under his leadership, NAESM has grown from an outreach activity to a nationally recognized organization which has been instrumental in addressing the health and social disparities associated with the incidence and prevalence of HIV/AIDS and other Health Disparities that affect black gay men. Rudy convened the first every National African American MSM Leadership Conference on HIV/AIDS in 2001; 2017 will service as the 15th year anniversary for this one of a kind national conference that focus on Black gay men around HIV/AIDS and other health disparities that affect Black gay men locally and nationally.

In addition to working in the HIV/healthcare field for more than 30 years and NAESM for more than 23 years, Rudy has served on various local, statewide and national HIV/AIDS committees and advisory groups/boards including: Georgia’s HIV Prevention Community Planning Group [community co-chair three terms]; Fulton County Board of Commissioners Ryan White Title I Planning Council; Georgia AIDS Task Force; CDC’s Advisory Committee for Black Gay Men’s Health; the National Black Gay Men’s Advocacy Coalition [past board chairperson] and a member of the Black Gay Research Group. His other accomplishments include creating the National African American MSM Leadership Conference on HIV/AIDS inaugurated 2001, the eight held in Brooklyn, New York in 2011. In 1992, he helped organized Georgia Shares, Inc., a federation of non-profit organizations deeply committed to social justice for all Georgians. Rudy has also been featured in several new articles and TV programs, such as the Bill O’Reilly Show and Essence Magazine as well as co-authoring: “Homelessness and Hunger as HIV Risk Factors for African American Male Commercial Sex Workers” in the Journal of African American Men, Volume 5, Issue 1 [2000]. In 2009 Rudy was one of the founding members of the HPTN 061 Black Caucus and a past member of the HPTN Science Review Committee.

In April 2012, Rudy retired as CEO of NAESM and became the board chair and is still serving in that position to date. Since retiring Rudy spends most of his time traveling internationally. Rudy is in the process of writing an autobiography of his life as a black gay man running a non-profit organization in the early days of HIV/AIDS.